A bit more on tarp colour

I had an idea tonight (dangerous I know) about how to colour the tarps. Basically I turned the tissue paper over and taped it to a scrap of cardboard then air brushed the back with Tamiya XF-57 Buff. One 'advantage' was that the tissue wrinkled so that might assist in making it look more like an old tarp.
I think that it might do for a start and as tarps end up all sorts of colours from black to browns to the off-white original then different base colours could be used.
The advantage of course is that the NSWGR stenciling and the locations of the tie down points are still clearly visible. 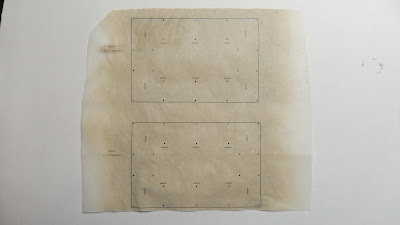 Some weathering of the tarp can be done later after it has been installed on a wagon.
Now, how can I make the attachment of the ropes less boring and quicker?
Somehow I don't think that there is an answer to that one.
Posted by Ray P at 10:00 PM

That looks very good, & much more in line with standard canvasses that seemed to come from the tarp factory in the 60's, although perhaps marginally lighter.

As my stock yard is around 40% complete at least for the sheep siding, I may try a tarp when all the railing is complete in the yard.

I have looked at the line you have used for ropes, but wondered about the thickness in comparison to some strong cottons, not just the types used for general sewing but the stronger types.

My idea would be to use that with some pva/cornice cement to make it firm, & just to stick to the sides instead of secure to the underneath of the wagon, as I think it would make a huge time saver.

Colin
Cotton has always looked too thick to me. I tried the EZ Line as it stretches and I figure that it should pull tight and look right.
Attaching it to the wagon is an operational or personal issue. James McInerney has removable tarps so that when shunted to a destination they can be removed before the next operating session to represent the empty wagon being picked up. These days this could be accomplished by having two wagons with the same numbers. Of course only for those that are part of the pickup goods, you don't need two complete sets of wagons. It all would depend on your operating sheme.

Australian Model Railway Magazine said...
This comment has been removed by the author.
November 30, 2011 at 1:44 PM

The sprayed Buff looks quite effective so far. Looking forward to seeing it on a wagon! Re: removable tarps - much more 'efficient' use of wagons. Two wagons with the same number - Arghhhhhh....... (runs off screaming into the night... ;)

Two wagons with the same number is bad but passenger coaches with different liveries on each side is alright?
Me suspects the DPC needs to think this through more!
On a slightly more serious note, it is good to see a bit of attention being given to 4 wheel wagons... more needed!

LOL! Craig. I was thinking more of the effort needed to create two vehicles with the same number, but only being able to use one of them at a time...

I think you missed the point, it is easy to have two wagons with the same numbers as you only have to buy two RTR wagons with the same number. Admittedly, other wagons might be a bit of numbering work or you can simply ignore the number anyway.
It all depends on how you want to run your operations. There are many different ways as you know.
Anyway removable tarps with ropes that aren't tied down!!!!
Where is that Detail Police Constable when you ned him?

Hi Ray,
I did some tarps for loco cabs using tea bags. I stained these with a couple different colours of Tamiya paints thinned with G P Thinners with excellent results. Not sure how the thinners would go with the tissue material you are using. After they are stained you could then put them through the printer process and maybe play with the darkness of the printing. Colouring them first may stiffen the material slightly, that may make for better printing. I like the idea of the easy line, Some things in this hobby need patients. I think this is one of them.
Love your work.
Ian

As I am still in building & planning stages & operating sessions as such are still a little way off, hopefully by mid next year, my plan is to have basically set trains that either work as pick ups & others that are through trains & will remain in basic consist form.

Wheat trains will be in blocks of 8 wagons that will be shunted to silos, & so far all have different numbers, so I am ok with the amount of RU, BWH & Tarped BCH wagons for that purpose.

Train consist listings will be as per old Teleprinter type loadings & those for detach/attach will be listed on the train, with them marshalled from the loco backwards, any attach will go behind the last wagons to be detached at further on stations. IN that sense, my train consist would allow for say 4 S trucks detach at A, 4 at B, 3 at C & so on, those wagons will be as they are attached to the loco, & back towards the van.

The hope is that it may preclude the need to number ever wagon differently, & be precise with wagon numbers for various operations.

Time will tell though in how it will work, also the other operators & having them doing road knowledge & training on the system.

James do you happen to have any blank copies of X2010 that I could get a photocopy of please.

Colin
My trains are similar in that any train that is just passing through the scene are 'set' trains and the pickups have X2010 forms showing what needs to be shunted, as such, I don't use a wagon card system. If I want to vary the pickup goods I work out another shunting scenario for the industries on the layout and print up another X2010. I think I need to add a few directions as well, perhaps on another sheet as some of the wagons end up in interesting places some times.
Colin, if you want to use my Excel version X2010 form it is on a link on my Bylong Operation Night post of 5 May 2009.