A One Hour Project

Last evening I came across a Sydney Hobbies timber load for a K wagon while searching through my 'treasure chest' of detail parts for another project. I didn't have any luck with what I was looking for so decided it was about time to do something with the wagon load kit as I had bought it a few years ago.

I thought I would document this as a blog post as I tried something that I had not done before and thought that it might be of use to others. 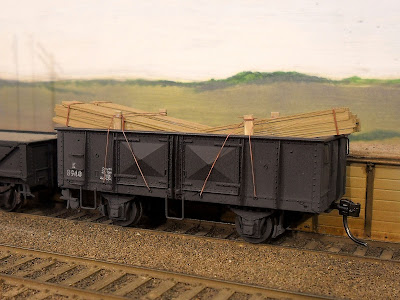 I placed the three stacks of timber into an Austrains K wagon which was laying on its side, two stacks one way and the third one in the centre the other way as shown in the photo accompanying the kit, applying a drop of ACC (Super Glue) at the cross point between the stacks.

I then slipped a piece of timber (supplied strip polystyrene) vertically either side of the stacks as shown in the photo aligning them with the hinges of the K wagon doors glueing them to the stacks but not the K wagon body.

At this point I removed the stacks from the K wagon and proceeded to paint the timbers.

I used Tamiya XF-59 Desert Yellow for the fresh sawn timber and Tamiya XF-57 Buff for the vertical scrap pieces of timber that are tied in place to hold the stacks. I feel that the Desert Yellow does a great job of giving that fresh cut timber look while the Buff gives a slightly weathered colour as could be expected for the scrap bracing timbers.

While the paint was drying I removed the K wagon chassis and drilled No. 78 holes in the tie down rings low down the side of the K wagon (see photo of finished model).

After the paint had dried I placed the load back into the K wagon and proceeded to use copper coloured Berkshire Junction Model Railroad Supplies EZ-Line (from The Model Railroad Craftsman at Blacktown NSW) to tie down the load as per the supplied photo. 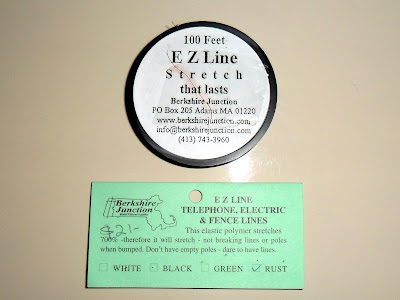 I chose the copper colour for two reasons, one is that the line comes in black, copper and green and we don't usually see black or green rope at least not in 1965 and the second reason was simple, I had the copper line already.

The trick is to ACC glue one end of the line to the inside of the K wagon body after passing the line through the hole in the ring. After this it is simple to stretch the line up and around the various timbers glueing occasionally as you go. I use a piece of tissue paper to blot up any excess ACC glue straight away and the use of an ACC glue accelerator solution really assists this work to move at a fast pace (I got my Flashtac Accelerator from Tom's Hobbies).

Where the rope is tied around the ends of the stacks I started by glueing the line end on the bottom of the stack end then wrapping it around as required. I left a few short ends of line hanging loose to indicate knots.
I didn't attempt to tie knots as the stretchy line is interesting to tie knots with, not impossible just interesting. I also couldn't work out how to model the knots on the rings, maybe someone else can work that one out.

So the new technique was the use of the EZ-Line for tying down loads, nice and thin, more or less the right colour and it looks tight as it should.
Posted by Ray P at 5:50 PM